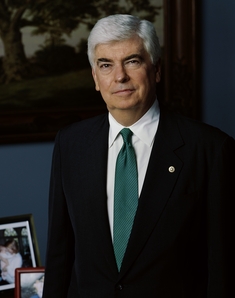 CHRISTOPHER J. DODD served as a United States senator from Connecticut for 30 years, after serving for six years in the House of Representatives. Senator Dodd authored major legislation in the areas of education, health, financial services, foreign policy and election reform. He played a decisive role in crafting significant health care reform with the passage of the Patient Protection and Affordable Care Act. He was also a principal author of the Dodd-Frank Wall Street Reform and Consumer Protection Act.

Throughout his years in public office, Senator Dodd worked to ensure the safety of Connecticut’s natural treasures, fighting against the construction of a natural gas facility on Long Island Sound and for the designation of Connecticut’s Eight Mile River as a National Wild and Scenic River. He is perhaps best known for bringing attention to children’s and education issues. He formed the first children’s caucus in the Senate, authored the first child care legislation since World War II, and wrote the Family and Medical Leave Act. A former senior member of the Senate Foreign Relations Committee, Senator Dodd is a recognized expert on Latin America; he speaks Spanish fluently and lived in the Dominican Republic as a Peace Corps volunteer for two years. He is the current chairman and CEO of the Motion Picture Association of America.